GageAmes.com has been due for a redesign for a long time, and now it’s finally happened!  The new site is inspired by Microsoft’s Modern UI design, specifically the Windows 8 Start Screen and Windows Phone 8.  In fact, my motivation to redesign the site was a result of publishing a Windows Phone 8 app (look for another post on that soon).  I feel the site is now cleaner but still represents who I am.  Fun fact:  I used Microsoft PowerPoint to help me visualize the design before coding it, which is a process that I highly recommend.

With the more professional design also comes more professional content.  I’m choosing to retain my older posts (despite the fact that some are embarrassing at this point), but you can expect my future posts to be focused more on my career and academics.  I hope it will become a true tech blog containing programming tips and tutorials from my real-life experience.

I would love to hear what you think of the new design.  Feel free to leave a comment on this post or email me with your feedback. 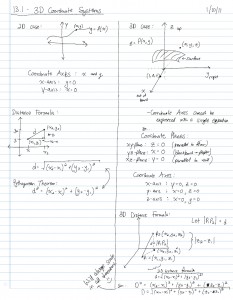 Today I attended an event at Penn State called TEDxPSU. For those of you who don’t know, TEDx is an independently organized TED event, which is basically a program of speakers communicating “Ideas Worth Spreading.” When I first found out about this event I wasn’t exactly sure what it was. I did some research on their website and watched quite a few videos from past TED events and came to the conclusion that it was something that I would really enjoy.
The event took place on 10/10/10 from 10:10 AM – 5:10 PM in Schwab Auditorium at Penn State. It consisted of twelve live speakers, seven prerecorded speakers from other TED events, and two musical performances. In short, every single one of these speakers and performances was spectacular and well worth listening to. It’s amazing how enlightening a person can be when speaking about something they truly have a passion for. As for the topics at TEDx, I cannot really group them into a general category besides “great thoughts and ideas.” I got to hear about topics like technological advancements, economic solutions, education strategies, personal betterment, and so much more. All in all, I loved every second of it.

TEDxPSU is an event that I will certainly take a lot away from. I took notes on every speaker and from each of them I managed to pull at least one great idea. I would like to share these ideas with all of you here, both to benefit myself by reflecting and to attempt to pass my realizations on to you. Not all of these little snippets will make sense out of context, but I would imagine they are still meaningful with a little thought. Sure, it may lead to a different conclusion then I came to in the context of the speech, but I don’t see anything wrong with that. As always, if you have any questions or thoughts please feel free to leave a comment below.

Finally, here are the websites of some amazing artists that I discovered at TEDxPSU: